My mother and I play a game in which one of us tries to maintain a serious expression despite what the other is doing. She usually wins. The first time we played it, I took the clown’s role. My mother immediately locked onto the sternest look I have ever seen — a countenance so intense and uncharacteristic of her that I could only marvel at where it came from, and how long it remains fixed no matter how many silly or stupid faces I make.

She on the other hand has no trouble making me laugh. Usually, she’ll start with her own facial distortions and when that doesn’t work, say something like, “Boy, you sure are ugly” — which cracks me up. She’ll then quickly apologize out of fear that she’s hurt me, but of course she hasn’t. She just forgot for the moment we were playing a game. 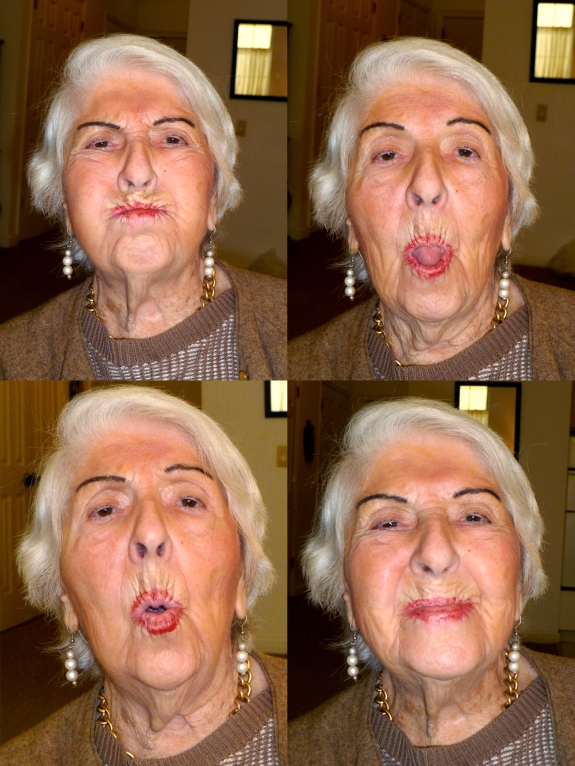 Sometimes we’ll just have a staring contest, sitting across from each other and slowly bringing our faces closer and closer until one of us blinks in surrender. Once, when our faces were only a foot apart, my mother yelled, “Boo!” (Where that came from is another mystery.) Good sport that she’s proven herself to be, she also apologized for possibly scaring me. Given her mental condition, I say bring it on.

space
At meals in the dining room, my mother sits opposite K~, the health-care aide for a lovely woman I’ve grown quite fond of. From what I’ve been told, I~ founded a private elementary school in Manhattan when she was younger, and suffered a stroke about 10 years ago. She has a twinkle in her eye and eats with her fingers which is actually quite charming. By contrast, my mother is a very picky eater who rarely finishes what’s on her plate — something I~ shows great concern about. If I didn’t know better, I’d swear she files a report to the kitchen once she gets back to her apartment. 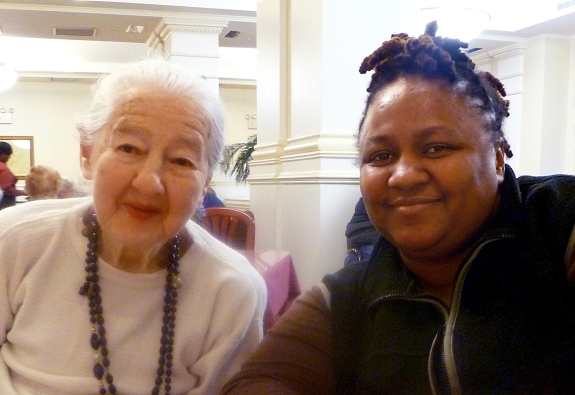 Anyway, K~ and my mother have a nice thing going with the funny faces they exchange with each other whenever K~ is not helping I~, or totally absorbed in her book of Sudoku puzzles. Their clowning has even become part of their good-bye ritual each evening.

During dinner, it’s not unusual to catch my mother gazing at K~ with the most adoring look in her eyes.