I recently asked a resident of a nursing home how he liked living there. He said it was like “being in jail. Just hurry up and die.” He wasn’t a newcomer, nor was he angry or upset. He was just resigned to a fate that seemed immutable. It was as damning as any indictment I’ve heard.

Forty-five years ago, while standing on a Boston subway platform, I noticed a beautiful bentwood rocking chair nearby. It belonged to a furniture maker who was bringing it back to his workshop for repair. He graciously let me sit in it until the train arrived, an experience that transformed a totally mundane, somewhat unpleasant ritual into something special. I realized then that it doesn’t take millions of dollars and years of construction to infuse urban spaces with wonder and delight, or with catalysts for positive social interaction.

That insight inspired Pedestrian Games, a modest movement of multi-disciplinary happenings and installations that engaged the public in novel, life-affirming ways, and took the pedestrian quality out of walking on city sidewalks — a precursor of today’s flash mobs and Improv Everywhere. It was also the start of my long-term dedication to play and its invigorating role in the lives of jaded, world-weary adults — or those with cognitive impairment whom ElderSparks serves. 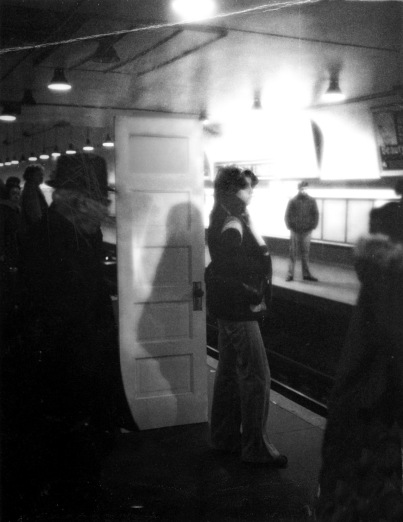 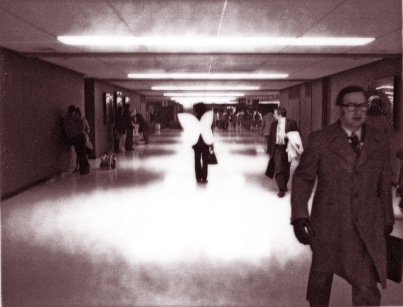 Two Pedestrian Games: (top) standing behind a closet door on a Boston subway platform; (bottom) walking around Logan Airport dressed as a typical traveler except for the pair of wings on my back.

Throughout the three months I worked privately with Anna, I was always on the lookout for other nursing-home residents to join our sessions and help lessen her feelings of loneliness and isolation. I also couldn’t bear to see how deadly the hallways and lounges were: ersatz art on the walls of flowers and nature scenes; individuals staring blankly into space, or half-asleep in recliners while large-screen televisions blared inane game shows, soap operas, and a daily litany of violence from cable news. It wasn’t an awful place as these facilities go but I got the impression that its understaffed workers, however committed they were to their jobs, had long ago surrendered to a management completely devoid of creative and compassionate vision.

When I wasn’t loaded down with art supplies, I would sometimes skip or do pirouettes and arabesques as I walked past residents waiting for their meds by the nurses’ station. Or I would hold my two-sided, smiley face/sad face mask in front of me, waving “hi” to people, and explaining that this was a mood alert: depending on which side was visible, its wearer should be given hugs or high fives.

Invariably, real faces would light up in real smiles.

My sessions with Anna usually ended around 5:00pm. Dinner was at 5:30 but residents would start lining up outside the dining room doors twenty minutes earlier. I never understood why: each had an assigned seat and was guaranteed a meal. It wasn’t as if this was a great opportunity to socialize either: a lounge was just around the corner, and most couldn’t carry on a conversation anyway. Instead, they just assembled on either side of the hallway, silently sitting in their wheelchairs or standing. Anna said they were just bored with nothing better to do. To me, who had to pass through this gauntlet whenever I left, it was a situation ripe with possibility.

In the beginning, I nodded and smiled politely, or waved from behind the mood mask. Later, it occurred to me that the scene was similar to the start of a basketball game, when players from each team are introduced to the crowd while running through a row of their teammates. So I started giving high fives to everyone as I exited. Once I led them in a cheer:

Give me another “N.”

What have you got?

We joked about holding tryouts for a cheerleading squad, and maybe developing a secret handshake. Soon I was giving fist bumps too, and experimenting with the telephone game. Like the bentwood rocker on the subway platform, a previously dull, prosaic experience turned into a joyful one.

The fact that I am neither a ballet dancer nor athlete means that any able-bodied person can do what I did. Imagine, if you will, a nursing home where staff members regularly take time out to gently dance with residents walking by; others break into song while making beds; opera or Frank Sinatra is heard over the sound system; walls are alive with in-house art and craft items; visitors join loved ones for meals in the dining room; and everyone feels part of a community as vital and stimulating in its own way as the world outside — only infinitely more loving. Such efforts don’t require a large investment in time and money — just a little imagination and an embrace of life to its fullest.