For the last few weeks, two of our ElderSparks regulars have been exploring rudimentary quilting, weaving, and collage. S~ got things off to a start with a free-form quilt made from fabric remnants, and J~ followed with a terrific paper weaving . At two subsequent sessions, each made additional woven pieces out of paper. Although perfectly wonderful in their own right, the plan was to cut them into sections that could then be reassembled into the basic building blocks of a larger quilt-like collage.

The piece on the right was made from the pages of a glossy food magazine I thought would interest J~ as a former food journalist. The combination of words and images also offered a way to therapeutically address the aphasia caused by his stroke.

The slits in the turquoise piece were made by S~ herself, tearing the sheet with her hands before I could even offer to do that for her. Usually, her limited manual dexterity prevents her from doing anything like this, so I took it as yet another confirmation that this accomplished quilter was totally on board with the program.

Working with sections of the actual weavings was initially frustrating though: it fell upon me to cut out the squares or rectangles, and glue strips in place so they wouldn’t fall apart during handling — tasks that slowed things down considerably; the uniform shapes were also too large, too few, and too limiting to accomplish much; moreover, J~ couldn’t understand the concept and no wonder — I was asking them to do something that even a trained artist in full command of his or her faculties would have trouble with.

When I suggested that maybe we should scrap the whole thing and start anew at the next meeting, their answer was a surprising and resounding “NO!” And before the hour was up, we had two very respectable pieces (J~’s on left, S~’s on right): 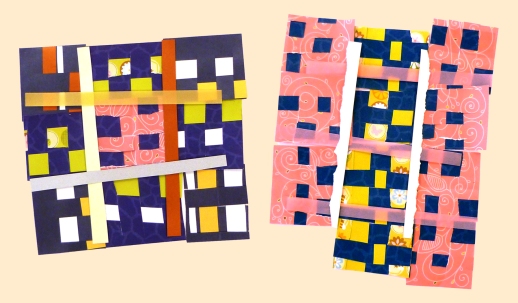 J~ and S~ both really liked his collage. In fact, when J~ saw a print of it the following week, he couldn’t stop kvelling, “That’s so beautiful!” S~, on the other hand, was unhappy with hers. On the way to lunch, I tried to explain that this wasn’t an easy exercise and that even the artist Rayna Gillman, whose book on free-form quilting inspired this project, repeatedly takes things apart and reassembles them before she is satisfied. That’s just par for the course I assured her. Besides, I added, J~ had a lot more help from me than she did. It felt like a heart-to-heart conversation, and I was glad to see she became more patient with herself as we talked.

In preparation for our most recent session, I made digital prints of their paper weavings and cut them up into squares, triangles, and strips. I also brought quilting books in to show them the incredible range, craftsmanship, and sophistication of this woefully under-appreciated art form, and to identify some common techniques and elements. Turning to their now-deconstructed weavings, I demonstrated different ways to combine the various shapes. The emphasis was not so much on creating a finished block, but simply enjoying the interplay of background and foreground, negative and positive space, and ever-changing possibilities — much like watching a light show, or billowing clouds in time-lapse photography.

Our collaborative working method involved the give-and take of ideas, trial and error, and a little kibitzing from whoever was not busy concentrating on their own collage. More input from me than usual was required but nothing was done without J~ and S~’s approval, whose wheelchairs now functioned as director’s chairs. The end result is something they can rightfully take full ownership of and feel great pride in — artwork hanging in their rooms that will be a daily reminder of their creative spirit and special gifts.