We’ve started a small ElderSparks group at a skilled nursing facility in central New Jersey. Four residents, at different levels of cognitive functioning and/or physical ability, have attended each hour-long weekly session. The participants are selected by staff in an experiment to see who benefits from this group approach, who might require more personalized, one-on-one attention, and who isn’t served by the work at all. Of the three meetings we’ve had so far, it looks like we have two regulars already. Little by little, we’re getting to know them as individuals and developing personal relationships with each. We’re also exploring different play modalities from week to week, a winnowing process to hone in on those which most enrich the lives of our target audience.

The first gathering garnered mixed reviews. There was some high-energy table tennis that had four women, sitting in wheelchairs, batting balloons across a table using our signature smiley face masks as paddles — a repurposing that was completely spontaneous. Their backhand or forearm capabilities were truly impressive, and it was nice to see them getting so much exercise.

Afterwards, we paired off for staring contests in which one partner tries to maintain a serious expression while the other makes funny faces or sounds. E~ never cracked a smile, earning her undisputed first-place honors and accolades from everyone. An attempt at imaginary play, i.e., passing an invisible egg or hot potato around the table, didn’t go anywhere, most likely because it wasn’t sufficiently set up beforehand. And cramming too much variety into the hour didn’t help either.

In offering feedback at the end, E~, the exemplar of gravitas, said that she wanted something more “sophisticated”; staff members too indicated a preference for activities that weren’t already being offered by the recreation department.

For our second session, I decided to see what the group would do with aluminum foil. Longtime readers of this blog will know how much I’m enamored of it as a sculptural material. Since the participants had all been female, I made some sample rings, bracelets, and necklaces beforehand that I hoped would inspire them.

We began by going around the table and having everyone briefly introduce themselves. It opened the door not only to conversation, but also a sense of connection and trust. Counting my colleague, Cynthia, and myself, we were two men and four women.

We also solved some earlier logistical problems by turning off the air conditioning (too noisy) and eliminating one of the tables so people sat closer together.

Following a short explanation and demonstration, everyone got a sheet of foil to work with and a look at the samples I had brought. L~ succeeded in folding the edges but could go no further; C~, who wasn’t sure where to begin, accepted my invitation to run her fingers over the sheet just for the tactile experience. Although both women were unable to actually make anything, they were intrigued by the jewelry and what the rest of us were doing. At one point I put a ring in my nose, explaining that this was a very stylish fad among young people. L~ couldn’t believe that teenagers were walking around the streets of her hometown looking like this. (Perhaps the fact that I’m in my sixties confused the picture for her.)

L~ was attracted to another piece of foil jewelry that she placed on her finger. It reminded her, she said, of an amethyst ring she loved as a child that belonged to her mother. The only time she was allowed to wear it was when she was sitting in her mother’s lap. The catalyst for this tender memory and personal sharing was nothing other than a whimsically crafted piece of aluminum foil. 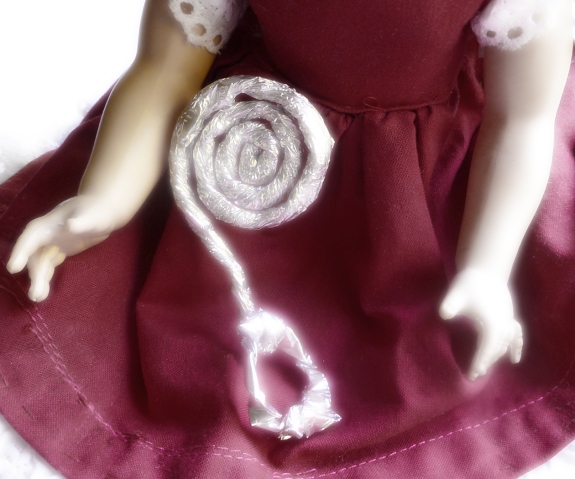 M~, the other male in the group, had a nice sense of humor. When I showed him a tube made out of foil that looked to me like a spark plug wrench (thus continuing my attachment to gender stereotypes), he said there was no way such a flimsy thing could do the job. “M~,” I jokingly pleaded, “It’s only pretend.” He decided he would make a dog with the foil sheet and started off with the confidence of someone who had done this all his life. When it was finished, his dog looked more like a lizard, but it was pretty fantastic nevertheless. 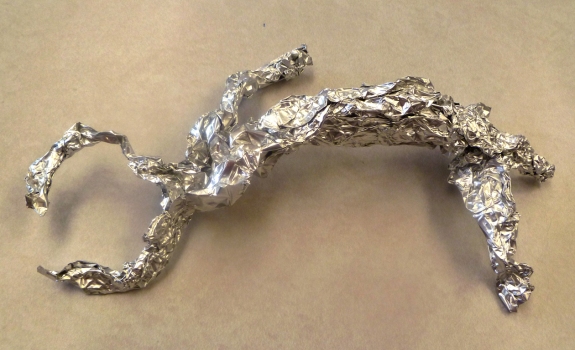 With this particular medium, coming up with anything that looks like something is a real achievement as far as I’m concerned.

Later, M~ confessed he was bored but acknowledged he didn’t have anything better to do. Good sport that he was, he stayed until the end, unlike another resident who left soon after we started. I made a foil necktie in another attempt to introduce something more masculine and Cynthia spent several minutes speaking with him once the hour was up. I hope he’ll give ElderSparks a second chance because his presence at the table, even with his resistance, was so endearing.