When I asked my mother if she’d like to hear me play the keyboard in her apartment, I discovered I had left my sheet music at home. Naturally, she said yes but at least there was a fall-back position, i.e., the programmed up-tempo songs that are so invigorating for her. Since standing for any length of time is not an option, we’ve found a way to dance while seated, using only our upper bodies, arms, and hands to move to the beat. We also did patty-cake, patty-cake in time with the music as a threesome — my mother, M~ (her aide), and I.

After a few minutes of this, I placed the keyboard on my mother’s lap and invited her to play some notes. The last time I tried this more than a year ago, she had trouble following my example. Sunday though, she succeeded in striking the keys with both hands, relying on only minimal guidance from me. (Perhaps her color-coordinated outfit had something to do with it.)

During dinner, I was anxious to see whether last week’s seating kerfuffle had been resolved. (My mother and her tablemate, I~, were placed with S~, a resident both disliked. When my mother subsequently moved to an adjacent table, I~ mistakenly believed it was because of her, not S~.)

I don’t know what happened in my absence but the tension was apparently gone — even though the seating arrangements remained the same. At one point, I got up to say hi to I~, who asked where my mother was (an aide was blocking her view). Later, I brought my mother over to her table so the two could greet each other. S~ was also present and everyone exchanged pleasantries — as best they could given their mental and physical frailty.

When K~, I≈’s aide, asked my mother if she was going partying and dancing afterwards, the scene took on a palpable sweetness: three elderly women and their female aides talking about a girls’ night out. I left to retrieve the keyboard so it wouldn’t be a total fantasy; when I returned, the programmed tunes were quite a hit.

There were still a few stragglers left in the dining room on our way out. I asked around to see if anyone played the piano and was directed to E~, a former concert pianist. She was happy to give the keyboard a try, starting off with a little cabaret music, followed by Chopin. Ears perked up in the room and people drifted over, excited to witness this performance by one of their own. Their mingling and interacting were a sight I rarely see at dinner time. I swear the room became brighter. 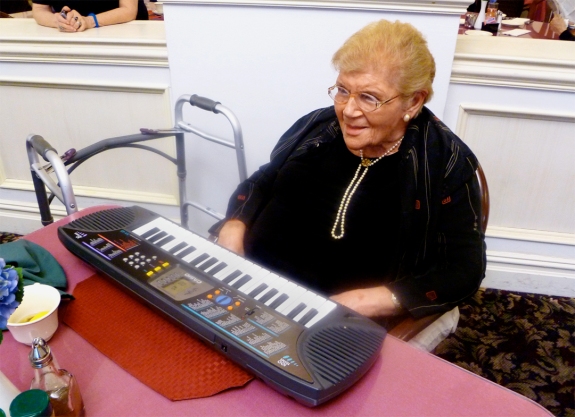 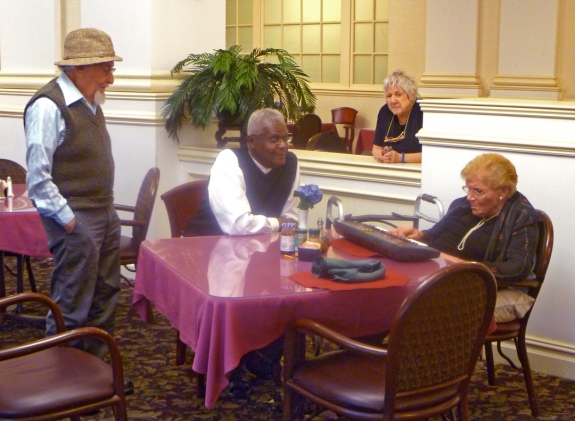 A few admirers remain for autographs.

I would have happily given E~ the keyboard on extended loan but she already had a full-size piano back in her apartment. S~, the gentlemen sitting next to her, asked if he could borrow it instead. It was his on one condition — that he bring it to meals at least once a week for a little après-dinner musical digestif.